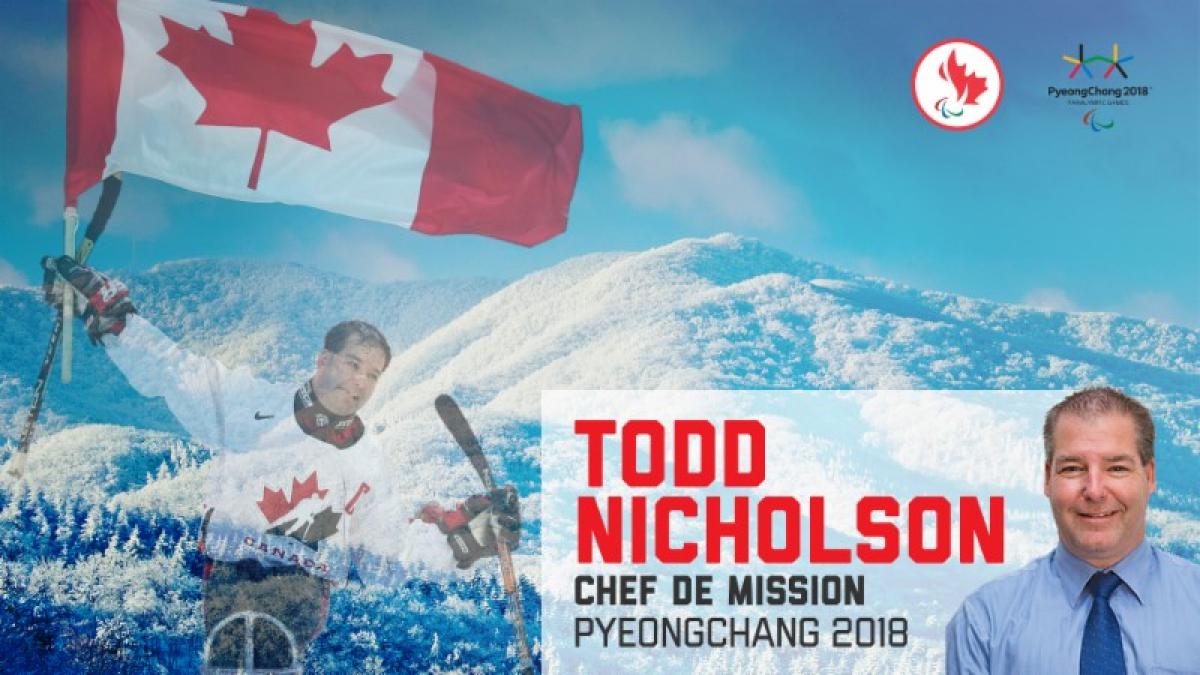 "Athletes and coaches are always my number one priority and I hope the experience I've gained both as an athlete and in the leadership roles I've fulfilled since my playing career will benefit the overall team."

Nicholson was a member of Canada's National Sledge Team from 1989 to 2010, was team captain for 15 years and won three Paralympic medals: gold (2006), silver (1998) and bronze (1994). Since his retirement from competition, Nicholson has remained deeply involved in sport at both the national and international levels as an athlete representative and advocate on and off the field of play.

"I'm very excited about leading Team Canada for the 2018 Paralympic Games," said Nicholson. "Athletes and coaches are always my number one priority and I hope the experience I've gained both as an athlete and in the leadership roles I've fulfilled since my playing career will benefit the overall team. I believe in the importance of teamwork and fair play in sports and in life, and in bringing a positive attitude to identifying winning approaches. My car accident changed how I do things in life, but I learned from that to never give up on anything."

The Chef de Mission is the official spokesperson for the Canadian Paralympic Team. He is a mentor, a leader and an inspiration to the athletes, setting the vision for the team and uniting all six sports at the Games - wheelchair curling, Para ice hockey, Para alpine skiing, Para snowboard and Para biathlon and Para cross-country skiing. It is a volunteer role that demands a significant time commitment and dedication, as part of the leadership team supporting the Canadian Paralympic Team.

Nicholson's focus will be on pre-Games preparation and on building and leading a support team that will ensure an optimal environment of success for the athletes. The Chef de Mission will also promote Canada's athletes and raise awareness of Paralympic sport and the Canadian Paralympic Team.

''With Todd Nicholson as Chef de Mission, Team Canada has at its helm one of the most knowledgeable, respected and engaged leaders in international Paralympic sport,'' said Karen O'Neill, CEO of the Canadian Paralympic Committee. ''A former team captain and now a trailblazer in advancing the playing field for Paralympic athletes, I know Todd will be the ideal mentor and leader for our team.''

In 2010, Nicholson retired from competition, but not from his commitment as a volunteer to sport and the Paralympic Movement. He currently serves as the Chair for the International Paralympic Committee (IPC) Athletes' Council and as such, is also a Governing Board member for the IPC and the IPC Athlete Representative to the International Olympic Committee. His term will end this year.

He is also the Canadian Paralympic Committee representative to the Own The Podium Board of Directors. Nicholson has direct hands-on experience planning and administering the Games - Olympic and Paralympic - in London 2012, Sochi 2014, Rio 2016 and PyeongChang 2018.

"On behalf of all Canadians, I want to congratulate Todd Nicholson on his selection as Chef de Mission for Team Canada at the Pyeongchang 2018 Paralympic Winter Games," said the Honourable Carla Qualtrough, Minister of Sport and Persons with Disabilities. "The Canadian Paralympic Committee has made a wonderful choice: Todd was a tireless competitor on Canada's sledge hockey team through five Paralympic Games, and has since been a passionate advocate for all athletes, both in Canada and internationally. I know that he will bring that same relentless spirit to preparing our athletes and coaches for the Winter Games in South Korea in just over a year from now."