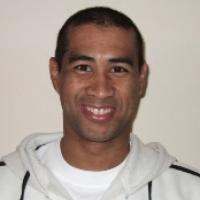 When and where did you begin this sport?
He took up the sport in 2007 at the Sport Science Institute of South Africa in Cape Town.
Why this sport?
He was studying alongside South African para-swimmer Natalie du Toit who encouraged him to get back into the water after his accident. "I took to the pool like a shark in the ocean."
Club / Team
Cape Dolphins: South Africa
Name of coach
Brian Button [club], from 2007

He had a double vascular bypass on both of his legs in 2004. (Athlete, 11 Apr 2011)
Superstitions / Rituals / Beliefs
"Having three stripes shaven into the side of my head makes me swim faster." (Athlete, 11 Apr 2011)
Sporting philosophy / motto
"The more you sweat in training, the less you bleed in battle." (Athlete, 12 Jul 2015)
Famous relatives
His aunt Faeeza Heuwel has represented South Africa in netball. His brother Taariq has competed in lifesaving competitions in South Africa. (Athlete, 11 Apr 2011; heslopsports.co.za, 07 Nov 2015)
Impairment
In 2006 he lost his right leg below the knee in a shark attack while he and his brother were training to become lifeguards. He successfully managed to lure the 4.5m great white shark away from his brother by slapping the water with his hand, until the shark bit his leg and dragged him 50 metres. He has drawn the jaws of a shark on his prosthetic leg as a reminder and to motivate him. (sportlive.co.za, 21 Jun 2012; achmat.com, 12 Jul 2010)
Other information
SHARK CONSERVATION
He works as a spokesperson for the conservation of endangered shark species. In February 2016 he was named a Global Shark Guardian by the United Nations Save Our Sharks Coalition. He was also a guest speaker at the 2014 Conservation of Migratory Species of Wild Animals Conference in Quito, Ecuador. (enca.com, 06 Feb 2016; humansofsa.co.za, 23 Mar 2015)

OTHER STUDIES
In 2009 he gained a coaching diploma from the Exercise Teachers Academy in South Africa. (heslopsports.co.za, 07 Nov 2015)