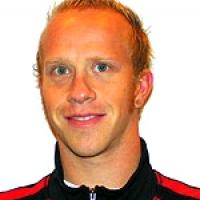 When and where did you begin this sport?
He learned to swim as a young boy and began racing while growing up in London, ON, Canada.
Club / Team
London Aquatics Club: Canada
Name of coach
Andrew Craven [club]; Craig McCord [national], GBR

Hobbies
Surfing, skateboarding. (swimming.ca, 2015)
Memorable sporting achievement
Winning two gold medals at the 2000 Paralympic Games in Sydney. (thestar.com, 23 Mar 2015)
Awards and honours
He was named Swim Ontario's Para-Swimmer of the Year in 1998, and then won the award seven years in a row from 2000 to 2006. (swimontario.com, 2013)

In 2002, he was named Male Athlete of the Year with a Disability at the Ontario Sport Awards. (heritagetrust.on.ca, 01 Jan 2013)

He was named 2001/02 Team Rookie of the Year at the Wilfrid Laurier Awards. (laurierathletics.com, 04 Feb 2002)
Impairment
He was born with a condition called arthrogryposis. As a result he has a club foot and underdeveloped muscles. (natation.ca, 21 Jul 2010)
Other information
RETURN TO THE POOL
In 2013 he ended a seven-year break from competitive swimming. In 2014 he made his return to the Canada para-swimming team after being named in the squad for the 2014 Para Pan Pacific Swimming Championships in Pasadena, CA, United States of America. "I didn't wrap up my career the way I wanted. I still feel there's something I need to achieve." (paralympic.ca, 31 Jul 2014)

OTHER EDUCATION
He has a master's degree in applied health services research from the University of Prince Edward Island in Charlottetown, PE, Canada. (paralympic.ca, 31 Jul 2014)

OCCUPATION
He works for a Danish IT company called KIMIK iT which provides a web-based hosting platform for a variety of sporting events. (swimming.ca, 31 Jul 2014; Twitter profile, 11 Feb 2016)