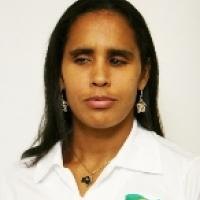 When and where did you begin this sport?
She took up athletics at age 13 at the Sao Rafael Institute in Belo Horizonte, Brazil.
Why this sport?
She was offered the chance to take up adaptive sports by a teacher at her school.
Training Regime
She trains six days a week.

She had knee surgeries in 1994 and 2003. (Athlete, 30 Nov 2010)
Superstitions / Rituals / Beliefs
She wears the Brazilian colours in every international competition. (Athlete, 30 Nov 2010)
Sporting philosophy / motto
"Always believe in your dreams. " (Athlete, 30 Nov 2010)
Awards and honours
She has been named the Most Influential Brazilian Athlete by Forbes magazine. (Athlete, 30 Nov 2010)
Famous relatives
Her husband Rafael Luiz is a former pole vaulter. (xinhuanet.com, 09 Apr 2010)
Impairment
She was born with pigmentary retinosis and astigmatism, and gradually lost her vision as she grew up. She stopped wearing glasses at age six and was completely blind by 1994. (noodls.com, 17 Aug 2013; Athlete, 31 Aug 2004)