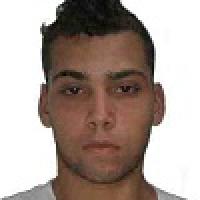 When and where did you begin this sport?
He took up Para athletics at age eight as part of a sports introduction programme in Belem, Brazil.
Why this sport?
He wanted to run, so his mother Claudia asked coach Suzete Montalvao if her son could train with the able-bodied athletes.
Club / Team
Associacao Paraolimpica de Campinas [APC]: Brazil
Name of coach
Amaury Wagner Verissimo [national], BRA

Most influential person in career
Coach Amaury Wagner Verissimo. (Instagram profile, 05 Sep 2019)
Hero / Idol
Brazilian racing driver Ayrton Senna, Brazilian sprinter Robson da Silva. (rio2016.com, 24 Jun 2014)
Sporting philosophy / motto
"If you can't fly then run, if you can't run then walk, if you can't walk then crawl, but whatever you do you have to keep moving forward." (Instagram profile, 15 Sep 2019)
Awards and honours
He carried the Olympic torch through Brasilia, Brazil during the relay for the 2016 Olympic Games in Rio de Janeiro. (rio2016.com, 03 May 2016)

He was named the 2013 Brazilian Athletics Competitor of the Year by the Brazilian Paralympic Committee [CPB]. (esporteessencial.com.br, 12 Dec 2013)

Following the 2012 Paralympic Games in London, he received the Order of Merit from the Para state government in Brazil. (diarioonline.com.br, 15 Sep 2012)
Ambitions
To compete at the 2020 Paralympic Games in Tokyo. (jornalismojunior.com.br, 21 Aug 2019)
Impairment
He had an intestinal infection that caused septicaemia shortly after birth. Both his legs were amputated above the knee 21 days after he was born. (cpb.org.br, 08 Mar 2013; paralympic.org, 28 Feb 2013)
Other information
PROSTHETICS
He ran with wooden prosthetics until age 15 when he met Brazilian Para triathlete Rivaldo Martins at a race in Belem, Brazil. Martins contacted the Challenged Athletes Foundation [CAF] in San Diego, CA, United States of America, and helped him to obtain specialised running prosthetics. He raced with his first pair of carbon fibre prosthetics in May 2007 and a month later became Brazilian champion, which secured his selection for the 2008 Paralympic Games in Beijing. (cpb.org.br, 08 Mar 2013; atletasperere.com.br 28 Mar 2013)