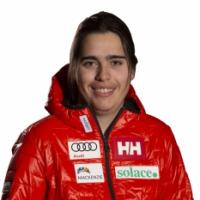 When and where did you begin this sport?
She began skiing at age six.
Why this sport?
She began to pursue skiing after attending an event for teenagers with an impairment, where a ski coach suggested she try the sport. "It's just so much fun. It's about being outdoors and the freedom to go fast."
Club / Team
CADS Alberta: Canada
Name of coach
Jean-Sebastien Labrie [national], CAN

She received the Danny Letain Award from the Canadian Association for Disabled Skiing [CADS] Alberta in 2010 and 2012. (cadsalberta.ca, Mar 2012; cadsalberta.ca, Nov 2010)
Impairment
A stroke at birth resulted in cerebral palsy, which affects the right side of her body. (activeforlife.com, 12 Mar 2014; stroke.org, 14 Sep 2010)
Other information
OVERCOMING EPILEPSY
At age 12 she was advised not to take part in competitive sports after being diagnosed with epilepsy, but with her parents' support she decided to continue skiing. "When you tell a 12-year-old kid they're not allowed to do something, it devastated me. I definitely had to fight for what I wanted after I was diagnosed with epilepsy. I'm glad I fought for what I wanted. I'm glad I fought for what I needed." (calgarysun.com, 07 Mar 2017)