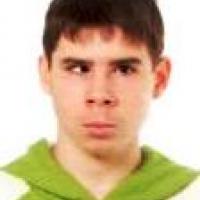 When and where did you begin this sport?
He started the sport in 2008 in the Moscow region of Russia.
Why this sport?
He likes the speed aspect.
Club / Team
Shukolovo Youth School of Olympic Reserve / Moscow Region Centre of Paralympic Sports: Russia
Name of coach
Natalia Brusova [personal], RUS, from 2008; Alexander Nazarov [national], RUS
Training Regime
He has three weekly trainings.

Nicknames
Sasha (izvestia.ru, 19 Dec 2013)
Hobbies
Communicating on the internet, parkour. (cordis.fondsci.ru, 2014)
Memorable sporting achievement
Winning first place in the Russian national championships. (Athlete, 05 Dec 2013)
Most influential person in career
Coaches Natalia Brusova and Alexander Nazarov. (Athlete, 05 Dec 2013)
Awards and honours
He holds the title of Master of Sport in Russia. (izvestia.ru, 19 Dec 2013)
Ambitions
To become a coach in his sport. (rg.ru, 2014)
Impairment
At age eight he climbed into the opening of a transformer box and was electrocuted, resulting in both of his hands having to be amputated. He lived in a children's home during his rehabilitation. (lifenews.ru, 07 Mar 2014; gazeta-n1.ru, 19 Dec 2007)