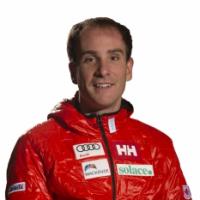 Residence
Squamish, BC, CAN
Languages
English

When and where did you begin this sport?
He began skiing in 2007 in Whistler, BC, Canada, through the Whistler Adaptive Sports Program. Prior to that he was involved in mountain biking. His father came up with a system of velcro straps to attach his feet to his bike pedals, so that he could ride around their hometown, Squamish, BC, with his friends. He continued mountain biking until he was age 16, when a knee injury forced him to stop. After looking at YouTube videos of athletes pulling off freestyle sit-skiing tricks, he was inspired to try skiing.
Why this sport?
His family signed him up for lessons. "My mum and grandma signed me up for a lesson with Whistler Adaptive Sports. I was reluctant because I hated the idea of disabled sports. It was cold and hard to learn and falling over on the flats and not being able to pick yourself up is really frustrating. I joined the BC [British Columbia] Team and then once you're on the BC Team, with Para sport, your focus is to go further and get to the [Paralympic] Games, because there's no other avenue for skiing. There's no big mountain or park or anything like that, so you start racing and you get into it."
Club / Team
British Columbia Para Alpine Ski Team [BCPAST]: Vancouver, BC, CAN
Name of coach
Lasse Ericsson [national], SWE