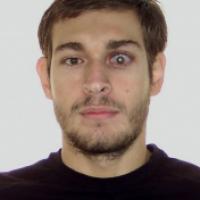 Injuries
He has suffered a broken nose during his career. He sustained the injury while getting out of the pool. (chill360.com.br, 07 Sep 2016)
Awards and honours
He carried the Olympic torch during the relay for the 2016 Olympic Games, after being selected by the city council of Araraquara, Brazil. (jornaloimparcial.com.br, 20 Jul 2016)

In 2014 he received a Sports Merit Medal from the local government in Araraquara, Brazil. (araraquara.sp.gov.br, 30 Jul 2014)
Impairment
He was born with congenital glaucoma. (g1.globo.com, 21 Jun 2016)
Other information
OTHER ACTIVITIES
He works as a volunteer at PARA DV, a non-governmental organisation for people with visual impairments based in Araraquara, Brazil. He has served as a physical education teacher and massage therapist at the institution. He has also worked as a musician for a religious organisation in Araraquara, Brazil. (portalmorada.com.br, 26 Apr 2018; Facebook profile, 26 Nov 2018)