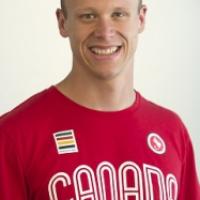 When and where did you begin this sport?
He took up wheelchair racing at age 18 after recovering from the loss of his leg. He admits he did not do a lot of sport growing up. "It's hard to believe today, but I was anything but sporty before. I was even a little paunchy."
Why this sport?
He watched wheelchair racing on television at the 2004 Paralympic Games in Athens, and then contacted the Quebec Wheelchair Sports Association in Canada. The organisation introduced him to wheelchair sprinter Daniel Normandin, who encouraged him to pursue the sport. "I watched the Olympics on television and there was a wheelchair race demonstration with Chantal Petitclerc and Diane Roy. I do not know exactly why, but I automatically fell in love. That was what I wanted to do."
Training Regime
He and his wife train together in a gym in their basement, often in the evenings after their daughter has gone to bed. They both train for about 15 hours a week.

Nicknames
Alex (actionsportsmanagement.ca, 26 Sep 2012)
Awards and honours
He was named the 2018 Para Athlete of the Year by the Quebec Athletics Federation in Canada. (coupdoeil.info, 02 Dec 2018)

He was named the 2014 Wheelchair Athlete of the Year by Athletics Canada. (athletics.ca, 27 Mar 2015)
Famous relatives
His wife Ilana Dupont represented Canada in athletics at the 2016 Paralympic Games in Rio de Janeiro and competed at four editions of the world championships between 2013 and 2019. (SportsDeskOnline, 21 May 2020; toronto2015.org, 14 Aug 2015)
Ambitions
To compete at the 2020 Paralympic Games in Tokyo. (coupdoeil.info, 30 Jan 2019)
Impairment
His right leg was amputated after he was involved in a motorcycle accident at age 17. He spent six months in hospital learning how to walk again. (coupdoeil.info, 23 Feb 2017; cyclonesroadandtrack.com, 14 Sep 2010)
Other information
BUSINESS
He owns Revolution Sport Equipment, a company that manufactures specialist equipment for wheelchair racers, including many of his competitors "We pay a lot of attention to detail. I am an athlete myself. I know their needs and there is not one athlete harder than me in the world. My products, I test them and I use them. If I sell so much, it's because I'm doing the best." (Facebook profile, 05 Sep 2019; nyrr.org, 19 Mar 2017; ici.radio-canada.ca, 01 Sep 2016)