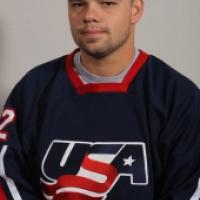 When and where did you begin this sport?
He was introduced to the sport by the Skating Association for the Blind and Handicapped [SABAH], a Buffalo-based educational organisation.
Club / Team
Buffalo Sabres: United States
Name of coach
Jeff Sauer [national]
Coach from which country?
United States
Preferred position / style / stance / technique
Forward

Hobbies
Listening to music, crafts. (livejournal.com, 03 Feb 2010)
Awards and honours
He was selected for the All-Tournament Team at the 2012 World Championships in Hamar, Norway. (paralympic.org, 02 Apr 2012)
Other sports
He was a varsity wrestler in high school. (usahockey.com, 02 Apr 2012)
Ambitions
To win a gold medal at the 2014 Paralympic Winter Games in Sochi. (teamusa.org, 30 Nov 2012)
Impairment
He was born with impaired legs, which were amputated at the Children's Hospital of Prosthetics in Moscow, Russia. Originally from the Ukraine, he was born near the site of the 1986 nuclear power plant accident in Chernobyl. His condition was a direct result of the radioactive fallout from the reactor explosion. (paralympic.org, 30 Nov 2012)
Other information
FROM UKRAINE TO THE US
He moved to the United States after being adopted by the Salamone family at age six. (teamusa.org, 30 Nov 2012)