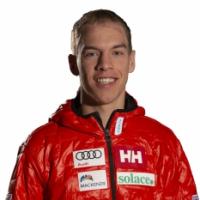 When and where did you begin this sport?
He began skiing at age four.
Why this sport?
He was inspired by his older brother, who was involved in local ski racing competitions.
Club / Team
Club de Ski Mont-Tremblant: Canada
Name of coach
Jean-Sebastien Labrie [national], CAN

Nicknames
Bambi ["My family did a lot of cycling. After a competition, we were eating in the restaurant and I was the only one to order from the Bambini menu. They just cut the 'ni' in Bambini and it became Bambi"]. (journallarevue.com, 23 Feb 2015)
Memorable sporting achievement
Placing first in the standing giant slalom at the 2016/17 World Cup event in Pyeongchang, Republic of Korea. (IPC, 18 Jan 2018)
Hero / Idol
His brother and mountain biker rider Marc-Antoine Guimond. (IPC, 18 Jan 2018)
Sporting philosophy / motto
"Do or do not, there is no 'try'!" (skiquebec.qc.ca, 10 Oct 2013)
Awards and honours
In 2018 received the Best Paralympic Debut by a Male Athlete award from the Canadian Paralympic Committee. (paralympic.org, 31 Oct 2018)

He was named the 2016 Male Rising Star of the Year by Ski Quebec Alpin in Canada. (Facebook page, 28 Aug 2017)
Famous relatives
His brother Marc-Antoine Guimond has competed in elite mountain biking. (cg2015.gems.pro, 05 Feb 2015)
Impairment
At age six months he was involved in an accident, which resulted in hemiparesis [full paralysis] on the right side of his body. He also had a stroke at age 12, which caused partial paralysis on the left side of his body. "I never wondered why all this happened to me, although it is frustrating to experience such things without even knowing why. Now, I just look ahead and continue forward. With my ski results, I hope to become a voice for people who have been stroke victims like me when they were young." (IPC, 18 Jan 2018; lapresse.ca, 21 Apr 2013; journaldequebec.com, 20 Aug 2017)
Other information
AMBASSADOR
He has served as an ambassador for 'Excellence Sportive Outaouais', a sports excellence programme for the Outaouais region of Quebec, Canada. (sportoutaouais.ca, 01 Feb 2020)