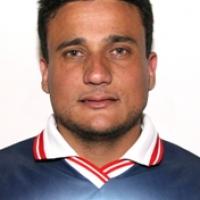 When and where did you begin this sport?
He took up the sport in 1993.
Why this sport?
At the time of his accident at age 23, he was a judo instructor. He had to give that up to recover but soon discovered the power of sport for rehabilitation. He began to swim, returned to teaching judo to children, and took up weightlifting.
He eventually decided to join a league and start competing, especially against able-bodied athletes. "I thought the sport could be a way to compete against people who had no disability and return to life as it was before the accident."
Club / Team
Clube Paraplegicos Sao Paulo [CPSP]: Brazil
Name of coach
Valdecir Lopes [national], BRA

Nicknames
Alex (Athens, 2004)
Most influential person in career
His father. (cpb.org, 2012)
Hero / Idol
Brazilian Formula One driver Ayrton Senna. (cpb.org, 2012)
Injuries
Two months before the 2000 Paralympic Games in Sydney, one of the bones in his pelvis pierced through his skin after he lost 20kg to get into his desired weight category. He has no sensitivity in that part of his body, so he did not notice the injury until an infection set in. He required surgery and 45 days of recovery. (anonimatosa.blogspot.com, 01 Jul 2007)
Sporting philosophy / motto
"Will and power." (cpb.org, 2012)
Other sports
He has won the national able-bodied weightlifting title during his career. (cpb.org.br, 06 Jun 2011)
Impairment
In 1993 he was robbed and shot twice. A bullet lodged in his spine, which resulted in the loss of feeling in his legs. (viveravida.globo.com, 24 Mar 2010)
Other information
NUTRITIONIST
He works as a sports nutritionist for Edge Life Sports Clinic in Sao Paulo, Brazil. (mulher.com.br, 22 Nov 2013)