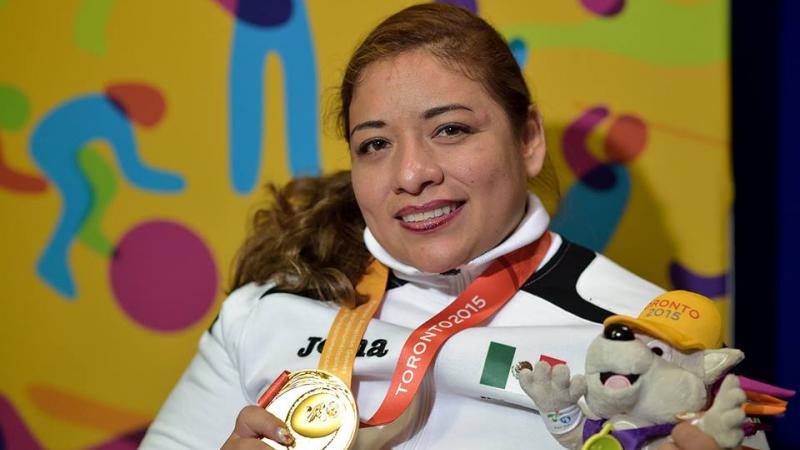 Amalia Perez is well established on the Para powerlifting scene. She has been participating in the sport for over 20 years now, and during this period she has become one of Mexico’s most well-known Paralympians thanks to the success that she has acclaimed throughout her career.

Perez is coached by her husband, Jose Enrique Alvarado Paiz, and she trains four days per week.

The year before, she enjoyed one of her most-celebrated victories as she claimed the World Championships title in the up to 55kg on home soil in Mexico City.

Perez made her Paralympic debut at Sydney 2000, where she won the silver medal in the women's up to 52kg weight category.

After taking another silver medal at the 2002 World Championships, the Mexican dropped down a weight category in search of a gold medal at the Athens 2004 Paralympic Games. However, despite her best efforts she could once again only muster a silver.

Things changed after this event, though, as Perez went one better at the 2006 World Championships, where she finally won a gold medal.

Then in Beijing, she set a new Paralympic record with a lift of 128kg en route to claiming her first Paralympic gold.

In 2012, Perez won her second Paralympic gold medal at the London Games in the women's up to 60kg weight category with a Paralympic-record lift of 135kg to prove to the world that she is only getting better with age.

And that is exactly what she has continued to do, winning World Championships gold in the women's up to 61kg in Dubai, UAE, in 2014.

In 2015, as well as gold at the first Americas Open Championships, she set a new world record at the Toronto 2015 Parapan American Games.

And at the Rio 2016 Paralympic Games, Perez secured her third consecutive gold medal with a new world record of 130kg, the third time she has held a world best mark.

When and where did you begin this sport?
She began practising sports at age six as part of her rehabilitation. She took up powerlifting at age 18.
Why this sport?
"I felt like I could practise it, and I also wanted to boost the women's competition in order to be included in the Paralympic Games."
Club / Team
Instituto Mexicano del Seguro Social [IMSS]: Mexico City, MEX
Name of coach
Enrique Alvarado [husband], MEX, from 2002
Training Regime
She trains at both the Mexican Paralympic Centre [CEPAMEX] and the High Performance Centre [CNAR] in Mexico City, Mexico.

She was named Paralympic Athlete of the Year at the 2009 Fox Pan American Sports Awards. (hispanicwire.com, 10 Dec 2009)
Other sports
Her husband Enrique Alvarado has coached the Mexico national Para powerlifting team. (gob.mx, 26 Oct 2016)
Ambitions
To compete at the 2020 Paralympic Games in Tokyo. (esto.com.mx, 28 Jun 2017)
Impairment
She was born with congenital arthrogryposis, a condition that impairs the muscle power in her legs. (Athlete, 19 Jul 2019; excelsior.com.mx, 10 May 2015)
Other information
SWITCHING CATEGORIES
In 2018 she moved from competing in the 55kg category to the 61kg category. She won both the 2018 Asia-Oceania Championships in Kitakyushu, Japan, and the Americas Open Championships in Bogota, Colombia, in the new weight class, but revealed the switch was just an experiment and that she plans to compete in the 55kg category in the lead-up to the 2020 Paralympic Games in Tokyo. "It was a good test to see how far I can get. I feel I'm on the right track. Now I am going to continue with my category." (amqueretaro.com, 06 Jan 2019; insidethegames.biz, 07 Dec 2018; gob.mx, 10 Sep 2018)

OTHER ROLES
She is a certified powerlifting coach with the International Powerlifting Federation [IPF], and also served as a judge at the 2019 National Powerlifting Championships in Mexico. "I know that future generations are coming after me and I want to do my part for my country and society." (Athlete, 19 Jul 2019; periodicoelmexicano.com.mx, 19 Mar 2019)

Third Online World Cup Series: All you need to know