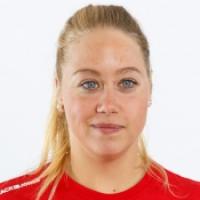 When and where did you begin this sport?
She took up Para swimming in 2008 in Thisted, Denmark.
Why this sport?
"My sister was a swimmer and I liked the water."
Club / Team
Aarhus Swim: Denmark

She was named the 2009 Athlete of the Year in Thisted, Denmark. (Athlete, 26 Aug 2010)
Ambitions
To finish in the top five in the 400m at the 2020 Paralympic Games in Tokyo. (paralympic.org, 28 Feb 2018)
Impairment
She was born three months prematurely, and has cerebral palsy as a result of a lack of oxygen at birth. The condition affects the right side of her body. (Athlete, 12 Sep 2019)
Other information
HOME COMFORTS
She got extra inspiration competing in front of a home crowd at the 2018 World Series event in Copenhagen, Denmark. "It's not very often that I have the chance to compete in my own country. It is always special to be on home ground and the fact I don't have to travel too far is also nice. You get more excited by hearing people cheering from the stands, so the extra support has definitely helped." (paralympic.org, 28 Feb 2018)