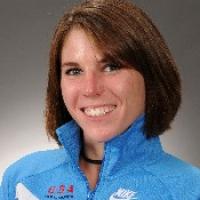 When and where did you begin this sport?
She took up the sport in 1997 in Philadelphia, PA, United States of America.
Why this sport?
She began racing after attending a Variety Club Camp in Pennsylvania, United States of America, that staged a sports programme for children with a physical impairment. "I love being on the track, pushing my body, seeing how fast and how far I can go. I also like the independent aspect, competing with myself, setting new goals for myself."

Nicknames
Chip [after she chipped a tooth on her tongue piercing]. (news-gazette.com, 04 Dec 2016)
Memorable sporting achievement
Winning medals at the Paralympic Games in 2008 and 2016. (Athlete, 17 Jul 2017)
Most influential person in career
Coach Adam Bleakney. (Athlete, 17 Jul 2017)
Hero / Idol
US basketball player Tim Duncan. (Athlete, 17 Jul 2017)
Injuries
She spent a year away from competition between 2018 and 2019 because of injury. She returned to action at the 2019 Berlin Marathon in Germany. (worldmarathonmajors.com, 29 Sep 2019)
Sporting philosophy / motto
"Do what makes you happy." (Athlete, 17 Jul 2017)
Other sports
She has played wheelchair basketball for the University of Illinois at Urbana-Champaign in the United States of America. (teamusa.org, 17 Nov 2010)
Impairment
She received an allergy shot at age five and her spinal cord became inflamed. She then developed a rare condition called transverse myelitis. Within a day, she had developed paraplegia. "I think there was one chance in six million that this would happen. But I think it’s usually better when you are young because kids are resilient." (patch.com, 22 Jul 2012; nyrr.org, 26 Feb 2010)
Other information
APPROACHING RETIREMENT
She works full-time as an archivist and collections curator at the United States Olympic & Paralympic Museum and, as a result, believes that the 2020 Paralympic Games in Tokyo will likely be her last competition. "When I accepted this position it automatically became my priority. My goal is to continue training and I hope to do a few more road races but I'm also aware that working full-time and training full-time can be a tricky setup. I've been considering retirement for a couple of years now and it's always been my number one priority to be in control of that decision, to select my retirement date and make it a choice versus being forced out by injury or something out of my control. I had a lot of time to think during that application process and I decided it's OK if it turns out this is the end of my career. I'm very happy with my achievements in the athletic world. I don't feel like I have anything to prove to anyone else, or more importantly, I don't feel like I have anything to prove to myself." (teamusa.org, 19 Jan 2021, 06 Aug 2020; LinkedIn profile, 20 Jul 2020)

CHANGING EQUIPMENT
Following a series of disappointing performances during the 2015 season, she and coach Adam Bleakney made the decision to change her racing setup. She had been using the same system during competitions for the previous 10 years, but elected to alter the shape of her racing gloves, her seated position, and her stroke mechanics. "I was scared to change something that worked for so long, but I was so frustrated with my recent performances, I was ready to take a risk. I figured that good or bad, at least the change would bring on new experiences and new opportunities. Luckily for me, I actually ended up faster and stronger than ever before." (news-gazette.com, 04 Dec 2016; tcsnycmarathon.org, 27 Oct 2016)

GIVING BACK
She gives talks in schools and supports fundraisers that aim to help with the costs of equipment for Para athletes. "One of the hardest things about adaptive athletics is the huge barrier to entry because of the cost of the equipment. Every adaptive sport requires a different piece of specialised equipment, and that is not cheap. Even a basic, entry-level racing chair can be close to 2000 USD, which is a huge commitment for a family - especially one with a young child who might not like it or will probably outgrow it in just a few years. Sports have been a huge part of my development as a person. Competing has helped build my self-confidence and my independence. That's why I really love working with adaptive sports programmes whenever I can to help get kids started." (illinois.edu, 18 May 2018)

FURTHER EDUCATION
She has studied for a master's degree in information science at the University of Illinois at Urbana-Champaign in the United States of America. (LinkedIn profile, 01 Jun 2019; Athlete, 17 Jul 2017)