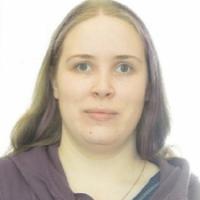 When and where did you begin this sport?
She began swimming at age four.
Why this sport?
She joined a summer swimming team seven months after she had surgery to remove her brain tumour. She discovered it was easier for her to move around in the pool as she became accustomed to her vision impairment.

She was named Female Para Swimmer of the Year by Swim Alberta in five consecutive years between 2008 and 2012. (swimalberta.ca, 2018)
Impairment
At age 10 doctors discovered she had a benign tumour on her brain that was about the size of a plum. She underwent surgery to remove it, but the optic nerve in her eye had already been damaged. (reddeerexpress.com, 26 Jun 2013)
Other information
CHANNEL SWIM
In 2014 she was a member of the first Para swimming team to cross the English Channel. The six-person squad from the Honu Para Swim Team in Vancouver, BC, Canada, completed the crossing in 14 hours and 46 minutes. "It was a lot different from pool swimming. Not having any guides, no ropes, was different. It was freeing. I always wanted to do something open water." (draytonvalleywesternreview.com, 22 Jul 2014)