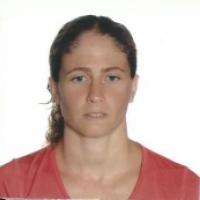 When and where did you begin this sport?
She began practising swimming at age 14. She later took up Para swimming in 2003 in Rosario, Argentina.
Why this sport?
She enjoyed the sport, and also wanted to take part in competitions.

Nicknames
Ana (Athens 2004, 24 Aug 2004)
Hobbies
Running, listening to music. (Athlete, 12 Sep 2019)
Most influential person in career
Daughter Nadia. (Athlete, 12 Sep 2019)
Hero / Idol
US swimmer Michael Phelps. (Athlete, 14 Jul 2015)
Sporting philosophy / motto
"Outdo yourself from day to day." (Athlete, 14 Jul 2015)
Awards and honours
A plaque with her name has been unveiled in the 'Paseo de los Olimpicos' [Olympians' Promenade] in Rosario, Argentina in recognition of her competing at four editions of the Paralympic Games between 2004 and 2016. (unsaltodeportivo.com, 28 Dec 2016)

In 2012 she won the Silver Jorge Newbery Award, an annual sports award in Argentina. (unmundoenpaz.blogspot.com.es, 21 Aug 2012)
Impairment
She began losing her vision at age 14 due to bilateral maculopathy. The condition damages the centre of the retina. (lacapital.com.ar, 13 Jan 2017; paradeportes.com, 05 Dec 2014)
Other information
DIFFICULT TIMES
Her mother died five days after Moro returned to Argentina, having competed at the 2008 Paralympic Games in Beijing, and her father passed away shortly after the 2015 Parapan American Games. In 2009 she also felt obliged to compete at an event in the United States of America so she would not lose her sporting grant, even though she had just heard about the death of her sister through illness. "Life forced me to make very important decisions that I surely would not have made if I had not been in those extreme situations. Sport also taught me to never quit, to persevere in everything." (lacapital.com.ar, 13 Jan 2017)