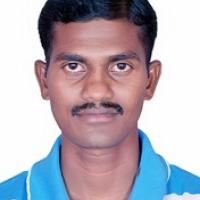 When and where did you begin this sport?
He began running in 1994 at school.
Why this sport?
He was a cross-country runner during his childhood in Kumbakonam, India, and continued to pursue the sport when he joined the Indian Army. After his accident he was inspired to take up Para athletics after watching South African athlete Oscar Pistorius on television. "He gave me hope. If he could win medals for his country with no legs, why couldn't I with one?"
Club / Team
Services Sports Control Board: Pune, IND

Nicknames
Blade Runner, Anand (Facebook profile, 22 Mar 2017)
Most influential person in career
His parents and wife. (sportscafe.in, 11 Aug 2018)
Hero / Idol
South African Para sprinter Oscar Pistorius. (Athlete, 16 Jul 2017)
Ambitions
To win a medal at the 2020 Paralympic Games in Tokyo. (indusind.com, 20 Mar 2018)
Impairment
In June 2008 he was injured by a landmine during an action along the Line of Control bordering Pakistan in the Jammu and Kashmir region. He was taken to hospital in a helicopter, where doctors amputated his leg from below the knee. "The landmine was covered in snow and it slid down the slope towards me. There was a loud explosion and I felt searing pain in my leg before everything became a blur. I didn't tell my parents for six months." (Athlete, 16 Jul 2017; timesofindia.indiatimes.com, 21 Jun 2014)