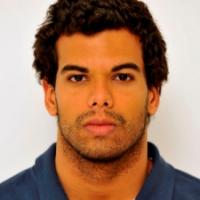 When and where did you begin this sport?
He began swimming at age six months with his parents. He took up the sport seriously after watching Canadian swimmer Benoit Huot compete at the 2004 Paralympic Games in Athens. He had previously taken part in able-bodied competitions.
Why this sport?
Doctors encouraged him to try the sport. "Swimming allowed me to put my impairment to one side."

In 2014 doctors discovered he had five hernias. He required nine months of rehabilitation and also worked with a psychologist to put the injury into perspective. (folha.uol.com.br, 28 Aug 2016; paralympic.org, 03 Jun 2015)

He missed three months of competition in 2007 after suffering from tendinopathy in both shoulders. (Athlete, 21 Sep 2010)
Sporting philosophy / motto
"Go hard or go home." (paralympic.org, 03 Jun 2015)
Awards and honours
He was flag bearer for Brazil at the 2011 Parapan American Games in Guadalajara, Mexico. (globoesporte.globo.com, 10 Nov 2011)
Ambitions
To compete at the 2020 Paralympic Games in Tokyo. (Instagram profile, 15 Nov 2018)
Impairment
The impairment to his left leg is a result of the effects of a polio vaccine he had as a child. He underwent eight operations before he was age eight, and his left leg is five centimetres shorter than his right. (caixa.gov.br, 08 Nov 2017; andrebrasil.com, 18 Sep 2016; folha.uol.com.br, 28 Aug 2016)
Other information
INELIGIBILITY
In April 2019 he underwent reclassification ahead of the World Series event in Sao Paulo, Brazil. He had spent the previous 14 years competing in the S10 category but after the mandatory reclassification, which all Para swimmers were required to undertake following a reworking of the classification process in 2018, he was told that he would not be able to compete in freestyle, butterfly or backstroke but he was still eligible for breastroke events. The Brazilian Paralympic Committee [CPB] filed an official protest with the International Paralympic Committee [IPC] over Brasil's ineligibility. "They doubted me when I became a Paralympic athlete but my limitation has not changed since then. There was no improvement or worsening of the condition. I only have losses because I am going to age with the years of training and effort as an athlete," Brasil said. (swimswam.com, 02 May 2019; globoesporte.globo.com, 25 Apr 2019)