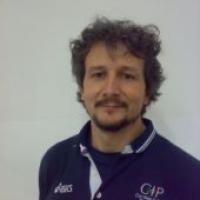 When and where did you begin this sport?
He began the sport in 2003 in Turin, Italy.
Why this sport?
He had played ice hockey at club level in Serie B [second division] in Italy, but after his accident took up coaching. With Italy hosting the 2006 Paralympic Winter Games in Turin, a national ice sledge hockey team was formed and Chiarotti was asked to coach it. He wanted to find out the differences between ice hockey and ice sledge hockey so tried the sport, and found he loved being able to play again. He decided he wanted to play for the team rather than coach it.
Preferred position / style / stance / technique
Forward

Nicknames
Ciaz (sportdipiu.it, 2016)
Hero / Idol
Norwegian Para ice hockey player Rolf Einar Pedersen. (Athlete, 08 Mar 2014)
Awards and honours
He was Italy's flag bearer at the opening ceremony of the 2014 Paralympic Winter Games in Sochi. (paralympic.org, 21 Apr 2015)
Other sports
He played ice hockey at club level in Serie B [second division] in Italy. (superabile.it, 15 Nov 2009)
Impairment
In 1990 he was involved in a motorcycle accident on his way home from work. His injuries resulted in the amputation of his right leg. (Athlete, 08 Mar 2014)
Other information
DEATH
He died in June 2018 after being diagnosed with a brain tumour. (paralympic.org, 08 Jun 2018)