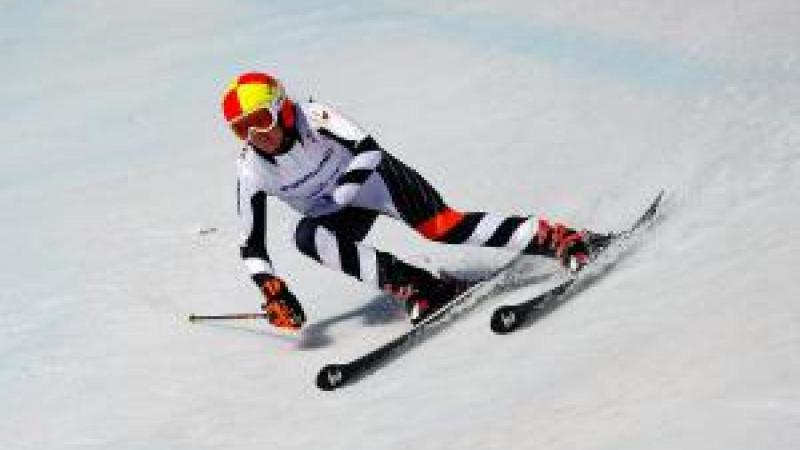 Andrea Rothfuss could have won many more titles and gold medals if it was not for her long-term rival Marie Bochet.

The German had a great performance in the women´s alpine skiing standing at the PyeongChang 2018 Paralympic Winter Games. But left with a bittersweet taste after failing to top the podium, finishing with four silvers and one bronze.

Bochet, on the other hand, returned to France with four golds.

Their rivalry came into full play at the Sochi 2014 Paralympic Winter Games, winning gold in the slalom after a DNF from the Frenchwoman and a further two silvers.

But Bochet had not failed to sweep a World Championships podium in two editions in 2013 and 2015, with Rothfuss taking silver on eight of those occasions.

That all changed at the 2017 World Para Alpine Skiing Championships. With both her and Bochet returning from injury, and keen to get back into form, the competition between the pair had never been so tight.

As Rothfuss crossed the line in the giant slalom she had an anxious wait as Bochet still had to complete her second run. As the Frenchwoman dipped over the finish, Rothfuss could not hold back her emotions as she realised the gold was hers. The German had halted the 14-time winning run of Bochet just over one year away from PyeongChang 2018.

The following day, Rothfuss proved her victory was no fluke as she claimed gold in the slalom, once again beating Bochet.

Rothfuss started her skiing career in the mid-1990s at age six, and began racing in 2000. From there, she had success at national and European level before heading to the Torino 2006 Games to make her Paralympic debut. In Torino, she took fourth in the slalom and fifth in the super-G.

Then, at just 19, Rothfuss showed her potential by winning four bronze medals in the five events she competed in at the 2009 World Championships. That set the stage for her first Paralympic Winter Games in 2010, where she won two silvers and a bronze.

When and where did you begin this sport?
She joined Skiclub Lossburg in Germany at age six.
Why this sport?
Her parents got her involved in the sport. She was also inspired to pursue Para alpine skiing after watching the 1998 Paralympic Winter Games in Nagano. "I saw the Paralympics on television, I was nine years old then. I absolutely loved it and decided that one day I wanted to go to the Paralympics."
Club / Team
VSG Mitteltal: Germany
Name of coach
Justus Wolf [national], GER

She missed the end of the 2015/16 season due to a broken left ankle. She returned to training in September 2016. (zvw.de, 16 Feb 2017; Facebook page, 20 Feb 2016)
Sporting philosophy / motto
"I ski because I enjoy it and also because I enjoy competing with and against others. I never fight my disability, it does not matter in competition." (leidmedien.de, 15 Oct 2018)
Awards and honours
In 2014 she received the Silbernes Lorbeerblatt [Silver Laurel Leaf] in Germany. (bundespraesident.de, 05 May 2014)

She was flag bearer for Germany at the opening ceremony of the 2014 Paralympic Winter Games in Sochi. (paralympic.org, 07 Mar 2014)

She was named the 2009 Female Para Athlete of the Year in Germany. (tagesspiegel.de, 13 Nov 2009)
Ambitions
To compete at the 2022 Paralympic Winter Games in Beijing. (sportschau.de, 10 Dec 2021)
Impairment
She was born without her left hand. (zvw.de, 16 Feb 2017)
Other information
RETIREMENT THOUGHTS
The 2022 Paralympic Winter Games in Beijing will be her fifth Games, and she expects it to be her final appearance on the Paralympic stage. "I think these are the last Games. I will feel when the time is right [to retire]. At some point I don't want to get up at 05:30 in the morning and struggle down there in the cold or lift heavy weights. I still love it at the moment. I don't need to think about it yet." (sportschau.de, 10 Dec 2021)

OCCUPATION
In 2019 she began working as a customs officer for the Bundeszollverwaltung [Federal Customs Service] in Germany. The job allows her flexibility with her training hours. "I can ski professionally through customs. I have never had more training hours." (bnn.de, 12 Jan 2022; sport-rhein-erft.de, 24 Feb 2022; stuttgarter-nachrichten.de, 05 Mar 2021)