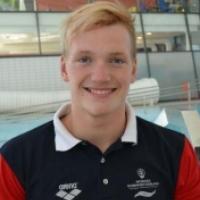 When and where did you begin this sport?
He began to focus on Para cross-country skiing in 2020 after switching from Para swimming. "Cross-country skiing was what I trained in a lot when I was at the Olympiatoppen [Norwegian national training centre]. I used it very much as an alternative exercise, and my dad and I went up to Sjusjoen every weekend to go skiing. I thought it was really fun and I liked the challenge."
Why this sport?
After developing an allergy to chlorine, he switched from swimming to cross-country skiing. "I knew the [cross-country skiing] head national coach from Norway because he was my teacher back in high school. He contacted me and now I'm here. In swimming we always focus a lot on details. I feel like I've taken that over here as well. I'm adapting to the technique pretty quick, but it's really different because in swimming you have 50 metres back and forth. You know exactly what you get, but here you don't know anything before you're on the starting line."
Club / Team
Drammen Svommeklubb [NOR] / Baerumsvommerne [NOR]: Norway
Name of coach
Bjorn Kristiansen [national], NOR; Magnus Evenby [national], NOR
Training Regime
He trains for about 750 hours per year.

He was named the 2015 Athlete of the Year at the Drammen Sports Awards in Norway for his achievements in Para swimming. (simma.nu, 06 Feb 2016)
Other sports
He has represented Norway in Para swimming and won bronze in the S7 400m freestyle at the 2016 Paralympic Games in Rio de Janeiro. (SportsDeskOnline, 19 Nov 2021; teamnor.no, 16 Mar 2021)
Ambitions
To compete at the 2026 Paralympic Winter Games in Milan-Cortina. (svelviksposten.no, 01 Dec 2021)
Impairment
At age two he was diagnosed with diplegic cerebral palsy. The condition causes impaired muscle power in his legs. (simma.nu, 06 Feb 2016)
Other information
SWIMMING TO SKIING
In 2019 he was diagnosed with a chlorine allergy, which eventually forced him to switch from competing in Para swimming to cross-country skiing. "I was scratching my whole body and I could hardly sleep at night. I often woke up in the middle of the night and scratched until the morning. You can't train 25 to 30 hours a week and sleep three to four hours at night. I had hoped that there was a solution to this problem, but now realise that the Paralympics in Tokyo will go on without me. But I do not envisage that my time as an athlete is over. Skiing is something completely different from what I'm used to in swimming, but I'm used to thinking differently and making the best of it. There are technical difficulties but I try all the time." (svomming.no, 12 May 2020; nrk.no, 08 Jul 2020; teamnor.no, 25 Feb 2020; nrk.no, 19 Feb 2020)