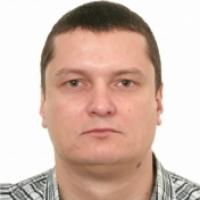 When and where did you begin this sport?
He began the sport in 2005 in Belgorod, Russian Federation.
Why this sport?
He was spotted by shooting coaches at a regional arm wrestling competition.
Club / Team
Belgorod Regional Centre of Adaptive Sports and Physical Education: Russia
Name of coach
Mikhail Bondarev [personal], RUS

In 2016 he was introduced to the Alley of Labour Glory as an outstanding athlete in the Belgorod region of the Russian Federation. (belnovosti.ru, 08 Aug 2016)
Other sports
He used to compete in able-bodied athletics for 12 years and received the title of Candidate for Master of Sport in the Russian Federation. (fonar.tv, 23 Dec 2015)
Ambitions
To win a medal at the Paralympic Games. (Athlete, 11 Mar 2020)
Impairment
In 2002 he fell from a second-floor balcony. He had locked himself out of his apartment and tried to climb onto his balcony from his neighbour's window. (fonar.tv, 23 Dec 2015)
Other information
OCCUPATION
Since 2011 he has worked in the Russian Ministry of Emergency Situations as a dispatcher for the firefighting service. He has also been a member of the social council under the Russian Ministry of Internal Affairs' department in the Belgorod region of the Russian Federation. (Athlete, 11 Mar 2020; fonar.tv, 06 Nov 2020)