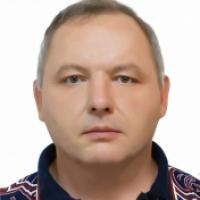 When and where did you begin this sport?
He began the sport in 1978 at age 14 in Khabarovsk, Russian Federation.
Why this sport?
His father was a forester and allowed him to shoot from a rifle. In a shooting club, however, he chose to take up pistol.
Name of coach
Sergey Sizov, RUS, from 2001

He holds the title of Honoured Master of Sport in the Russian Federation. (vnashupolzu.ru, 08 Aug 2016)
Impairment
After becoming injured in 1984, he underwent unsuccessful surgery which resulted in the loss of a leg. (bestmagazine.ru, 01 Jul 2012)