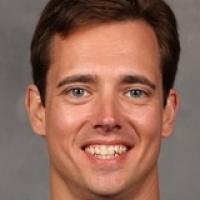 When and where did you begin this sport?
He began playing the sport in 2002 with the Rehabilitation Institute of Chicago [RIC] Blackhawks in United States of America.
Why this sport?
He played wheelchair basketball after his accident, but also searched for a sport he could play outside the basketball season. He had always been an ice hockey fan, so once he discovered Para ice hockey he wanted to give it a go.
Club / Team
RIC Blackhawks: Chicago, IL, USA
Name of coach
Guy Gosselin [national], USA
Preferred position / style / stance / technique
Defence

Most influential person in career
Coach Jeff Sauer. (Athlete, 06 Mar 2014)
Other sports
Prior to his accident he played roller hockey for the Bettendorf Young Guns in Iowa, United States of America. (Vancouver, 21 Mar 2010)
Ambitions
To compete at the 2018 Paralympic Winter Games in Pyeongchang. (qctimes.com, 23 Jul 2016)
Impairment
He lost both legs attempting to board a moving train in 1994. He lost his balance, fell under the train and his legs were severed. (Athlete, 06 Mar 2014; huffingtonpost.com, 26 Feb 2013)
Other information
LEADER
He was named captain of the US national Para ice hockey team for the 2016/17 season. He also captained the team at the Paralympic Winter Games in 2010 and 2014. (usahockey.com, 20 Mar 2017; qctimes.com, 23 Jul 2016)

RETIREMENTS
After winning a gold medal at the 2010 Paralympic Winter Games in Vancouver, he retired from the sport to spend more time with his family. In 2013 he made a comeback and went on to win gold at the 2014 Paralympic Winter Games in Sochi. Soon after the event he retired from Para ice hockey for a second time, but in 2016 he made another return to the sport with the aim of winning a third Paralympic gold in 2018. "It's all about the love of the game and being part of the team more than anything. I feel like with all the work we've put in previously, we're working on creating a dynasty, not just one great Games here or there. It's more of a long-term success of the programme and I'd like to be a part of it." (qctimes.com, 23 Jul 2016; teamusa.org, 17 Dec 2014; teamusa.org, 26 Dec 2013)