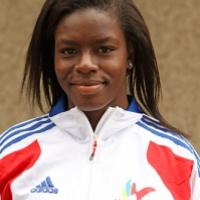 When and where did you begin this sport?
She took up athletics in 2004 in Grenoble, France, and competed against able-bodied children until 2011 when she began training specifically with a Para sport coach.
Why this sport?
She tried a range of athletics disciplines before settling on sprinting and jumping events. "I liked the variety of disciplines. The training sessions are so different and I enjoy them."
Club / Team
Lyon Athletisme: France
Name of coach
Thomas Verro, FRA
Training Regime
She trains up to eight sessions a week.

She has been affected by several injuries particularly her hamstring throughout her career. (sportmag.fr, 28 Jan 2019)

In May 2016 she had a minor lower back injury while competing at the national championships in Charlety, France. (Facebook profile, 24 May 2016)
Sporting philosophy / motto
"Suffer today and live the rest of your life as a champion." (malakoffmederic.com, 13 Jul 2017)
Ambitions
To compete at the 2020 Paralympic Games in Tokyo. (enroutepourrio.eu, 23 Mar 2017)
Impairment
Her impairment is a result of polio as a baby, resulting in an impairment to her left arm. (Twitter profile, 07 Oct 2019; Athlete, 20 Aug 2018; handisport.org, 24 Sep 2015 )
Other information
OCCUPATION
She works in external communications for France's national railway network, SNCF, in the Auvergne-Rhone-Alpes region. "This job is my stability. During the day I focus on it and in the evenings it is time for sport. Intellectual stimulation is something that helps me. As an athlete I know what it means to have long-term objectives and to look at something from a bigger perspective. I am happy to be able to bring my abilities to the benefit of a company such as SNCF." (sncf.com, 17 Dec 2019)

GROWTH OF PARA SPORT
In 2021 she said that she believed the coverage of Para sport had grown but more could still be done. "Para sport is under covered by the media, but it is true that in the space of seven years, things have changed quite a bit in our favour. Some media have made a lot of efforts in recent years. Since I joined the French team, I have seen this change take place little by little. Before, only the Paralympic Games were broadcast, while today the world championships are also covered. I also feel that there is more interest in Para sport, whether on social networks or in the media. But it is clear that sports results are not systematically relayed. We're still a media niche, of course." (lesportaufeminin.fr, 08 Mar 2021)

OTHER STUDIES
In 2013 she studied for two semesters at Coventry University in England. In 2015 she graduated with a degree in international trade from Lumiere University Lyon 2 in France. In 2017, she began studying for a master's degree in management and communication. (Instagram profile, 18 Feb 2017; angelina-lanza.com, 13 May 2015)