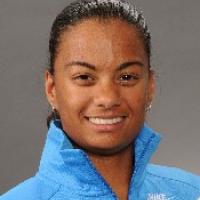 When and where did you begin this sport?
She was introduced to para-sports at age five.
Why this sport?
She took part in different sports at the Massachusetts Hospital School but took a strong liking to track.
Name of coach
Adam Bleakney
Training Regime
She trains six days a week.

Hobbies
Travelling. (news.cision.com, 03 May 2012)
Memorable sporting achievement
Competing at the 2011 World Championships in Christchurch, New Zealand. (umission.org, 2013)
Sporting philosophy / motto
"Dream. Drive. Do." (anjaliforberpratt.com, 24 Feb 2010)
Awards and honours
She received the 2012 Amazing Mentor Award from the United States Olympic Committee [USOC] for her contributions to young athletes. (news.cision.com, 03 May 2012)
Impairment
Two months after arriving in the US she contracted an illness resulting in transverse myelitis, a disorder that affects the spinal cord. The condition left her paralysed from the waist down. (anjaliforberpratt.com, 24 Feb 2010)
Other information
FROM INDIA TO THE UNITED STATES
She was born in Calcutta, India, and lived in an orphanage for two and a half months before being adopted by a family from Massachusetts in the United States. (anjaliforberpratt.com, 24 Feb 2010)

EDUCATION
She has a degree in speech therapy and hearing, and she also has a doctorate [Ph.D] in human resource education, both from the University of Illinois. (prnewswire.com, 19 Feb 2013)

AUTHOR
She is the co-author of an educational colouring book for children titled 'Colour, Learn & Play: All About Sports for Athletes With Physical Disabilities'. (prnewswire.com, 19 Feb 2013)