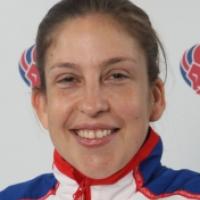 When and where did you begin this sport?
Injury and brain surgery meant she had to retire from wheelchair basketball in 2009, but she was later encouraged to take up shooting by the British Paralympic Association [BPA]. "The BPA have a talent transfer scheme and suggested I take up shooting, so I just went from there. I first picked up an air pistol in late 2010. I'd never done it before, but luckily I seem to be quite good at it."
Why this sport?
She was also motivated to pursue shooting in order to win a Paralympic medal, which she was unable to achieve in wheelchair basketball. "It’s the only major honour I’ve never won. I don’t like to say it’s an obsession, but I suppose it is. I felt I had more to give."
Name of coach
Pasan Kularatne [national]

She was presented with a lifetime achievement award from Wheelpower in 2009. (annwild.co.uk, 24 Oct 2011)

She was awarded the Outstanding Achievement award by Brunel University in England in 2004 and again in 2009. She was also given an honorary master's from the same institution for services to sport in 2004. (annwild.co.uk, 24 Oct 2011)

She was named Most Valuable Player [MVP] at the 1993 European Wheelchair Basketball Championships. (annwild.co.uk, 24 Oct 2011)
Other sports
She represented Great Britain in wheelchair basketball at the 1988 Paralympic Games and went on to captain the team for over a decade. She also competed in the 1996 Games in Atlanta, Sydney 2000, Athens 2004 and Beijing 2008. (eadt.co.uk, 22 Jan 2012)
Ambitions
To push the boundaries and see how far she can go. (disabledshooting.org.uk, 23 Feb 2013)
Impairment
She was born with spina bifida. (disabledshooting.org.uk, 23 Feb 2013)
Other information
NATIONAL FIRST
She was the first female wheelchair basketball player to become coach of a men's National Premier League [NPL] team in Great Britain. She was also the first female to play in a men's NPL team. (annwild.co.uk, 24 Oct 2011)

OTHER ACTIVITIES
She is head coach of wheelchair basketball club London Titans in England. She provided television analysis of the women's wheelchair basketball competition at the 2012 Paralympic Games in London. She also appeared on a Paralympic special of 'Come Dine With Me', a cooking programme on British television. (eastlondonadvertiser.co.uk, 17 Oct 2014; tvnewsroom.co.uk, 05 Apr 2013)