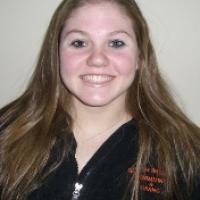 When and where did you begin this sport?
She began swimming in 1996 at age five at a local pool in her hometown of Golden Valley, MN, United States.
Why this sport?
"I wanted to do everything my brother did, and he was on the swim team. It was also a sport I could do without pain."
Name of coach
Tom Franke [personal], USA, from 2008

Hobbies
Going to concerts, studying medicine, travelling. (Athlete, 07 Jan 2016)
Memorable sporting achievement
Winning a gold medal at the 2008 Paralympic Games in Beijing and winning a silver medal in the 4x100m freestyle relay at the 2012 Paralympic Games in London. (Athlete, 07 Jan 2016)
Most influential person in career
US para-swimmer Justin Zook. (Athlete, 07 Jan 2016)
Hero / Idol
His parents. (Athlete, 07 Jan 2016)
Superstitions / Rituals / Beliefs
Her alarm has to be set with the last digit as an 'eight'. She also does the same warm up for every competition. (Athlete, 11 Jan 2011)
Sporting philosophy / motto
"It is what it is," [Former US swimming coach Jimi Flowers]. (Athlete, 11 Jan 2011)
Impairment
She was born with a deficiency of the fibula, resulting in a shortened right leg with three toes and an unstable ankle joint. She has undergone a number of operations for her impairment since 2000, including major surgery to lengthen her leg in 2005. (Athlete, 11 Jan 2011; US Paralympics, 03 Mar 2010)
Other information
HIGHER EDUCATION
In 2015 she began studying genetics at Icahn School of Medicine at Mount Sinai in New York, NY, United States. She has also studied biology at Gustavus Adolphus College in St Peter, MN, United States. (Facebook profile, 10 May 2015; Twitter profile, 03 May 2015)