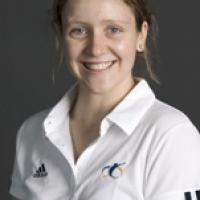 When and where did you begin this sport?
She took up competitive swimming after being forced out of athletics due to injury in 2002.
Why this sport?
She has always enjoyed swimming. She used to live in Indonesia, where she would swim to cool off.
Club / Team
Cranbrook Eastern Edge Swim Club: Sydney, NSW, AUS
Name of coach
Yuriy Vdovychenko [national]

She co-captained the Australian swim team at the 2008 Paralympic Games in Beijing. (foxsports.com.au, 24 Aug 2008)

She was named Bond University Sportsperson of the Year of 2007 and was a finalist for the Australian Universities Sportsperson of the Year of 2007. (paralympic.org.au, 13 Jan 2010)
Other sports
She used to compete in athletics but had to give up the sport because of repeated stress fractures. (paralympicchallenge.gov.au, 25 Apr 2012)
Impairment
She is missing the lower part of her left arm as the result of a congenital limb deficiency. (paralympic.org.au, 13 Jan 2010)