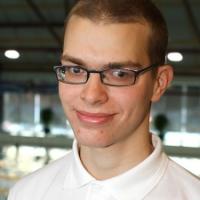 When and where did you begin this sport?
He began swimming at age 10.
Why this sport?
Swimming challenged him and he loved the feeling of freedom he got from being in the water.
Club / Team
SC Rovaniemi: Finland
Name of coach
Gerd Buttner [personal], FIN, from 2016

He was named the 2012 Swimmer of the Year by the Finnish Swimming Association. (lansivayla.fi, 27 Dec 2012)
Ambitions
To compete at the 2020 Paralympic Games in Tokyo. (lapinurheiluakatemia.fi, 27 Feb 2017)
Other information
RETIREMENT PLANS
He plans to retire from swimming after the 2020 Paralympic Games in Tokyo and wants to turn to coaching. He already has coaching experience working with young swimmers in Rovaniemi, Finland. "As a coach, I have to give the athletes responsibility, because I don't see underwater, for example, what's going on there. I'll tell you what to do and how it should feel. As a swimmer, I know power well, how something should feel, and I urge them to investigate it by giving them responsibility." (santasport.fi, 19 Feb 2021)