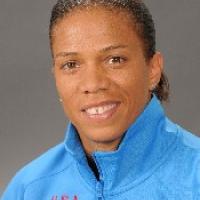 When and where did you begin this sport?
She took part in her first para-athletics race in 2002 at Disney's Wide World of Sports in Orlando, FL, United States of America.
Why this sport?
She had been an athlete since age five when her uncle started the Camden City Track Club in New Jersey, United States of America. When she woke up in hospital after her accident, her first thought was she would not be able to run or play basketball again. Her surgeon gave her a pamphlet about the Paralympic Games and told her to look into it, and she set herself the target of competing at the Games and winning a gold medal.
Name of coach
Al Joyner, USA; Brooks Johnson, USA

Hobbies
Social media, sport, reading, philanthropy. (LinkedIn profile, 2015)
Most influential person in career
Her family. (ossur.com, 30 Sep 2013)
Hero / Idol
US basketballer Michael Jordan. (ossur.com, 18 Oct 2011)
Injuries
She won the T44 100m at the 2008 Paralympic Games in Beijing despite a labral tear in her left hip caused by a fall in the 200m five days earlier. She went on to have surgery on her left hip in 2009. (espn.go.com, 05 April 2012; gazette.com, 12 May 2011)
Sporting philosophy / motto
"Stop waiting for someone to validate you. Stamp your own ticket to greatness." (Facebook page, 26 Feb 2016)
Awards and honours
She received the 2015 National Collegiate Athletic Association [NCAA] Inspiration Award in the United States of America. (ossur.com, 16 Jan 2015)

She received the 2013 National Association of Black Journalists [NABJ] Pioneer Award in the United States of America. (aprilholmes.com, 2013)

She was named 2006 Amateur Athletic Foundation of Los Angeles Fast Woman of the Year in the United States of America. (agm.us, 16 May 2015)

In 2004 she received a United States Olympic Committee [USOC] Spirit Award. (agm.us, 16 May 2015)
Other sports
She competed in able-bodied athletics at university level. (ncaa.org, 13 Nov 2014)
Impairment
In January 2001 she was trying to board a train from Philadelphia to New York in the United States of America. She was the last person to get on, but slipped and fell onto the track. The train conductor did not hear her cries for help and the train pulled out of the station and onto her left leg. Rescue workers tried to lift the train but her leg had to be amputated below the knee. (aprilholmes.com, 08 Apr 2014; espn.go.com, 05 April 2012)
Other information
HISTORIC ACHIEVEMENT
In July 2006 she became the first female with a single leg amputation to run the 100m in under 13 seconds, when she finished with a time of 12.98s in Atlanta, GA, United States of America. (paralympic.org, 10 Jul 2015; teamusa.org, 13 Jul 2013)

OTHER STUDIES
In 2005 she graduated with a master's of business administration and marketing from the University of Phoenix in Tempe, AZ, United States of America. (LinkedIn profile, 2015)

OTHER ACTIVITIES
She founded the April Holmes Foundation, a non-profit organisation assisting people with physical and intellectual impairments with scholarships and medical equipment. She has worked with US First Lady Michelle Obama on the 'Let's Move!' campaign to fight childhood obesity in the United States of America, and has released two books 'The Winning Way' [co-wrote with Brian Tracy] and 'Stop Limping Thru Life, Start Running'. (agm.us, 16 May 2015; LinkedIn profile, 2015; aprilholmes.com, 08 Apr 2014)