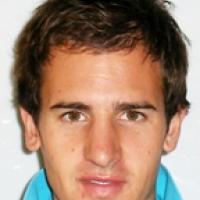 When and where did you begin this sport?
He began the sport in 2006 in Bellville, South Africa.
Why this sport?
After a friend died in a motorcycle accident he realised his own accident could have been a lot worse. This gave him the inspiration to take up Para athletics. He had also loved sports from a young age and wanted a way to get back into sport after losing his leg.
Club / Team
Maties ParaSport Club: Stellenbosch, RSA
Name of coach
Suzanne Ferreira [club], RSA, from 2006

He did not compete at the 2013 Great City Games in Manchester, England, due to an infection in his leg. He underwent surgery to fix the problem in May 2013. (roadtorio.co.za, 25 May 2013)

In 2003 he tore the anterior cruciate ligament in his knee while playing rugby. (ossur.com, 04 Nov 2010)
Sporting philosophy / motto
"A gold medal is a wonderful thing but if you're not enough without one, you will never be enough with one." (Athlete, 22 Oct 2015)
Other sports
He played competitive rugby union for Grey College in Bloemfontein, South Africa, and was signed by the Golden Lions before his accident. He also competed at the South Africa Disabled Golf Open. (ossur.com, 04 Nov 2010)
Impairment
His left leg was amputated below the knee after it got caught in a propeller in a boating accident in 2003. (whpsschool.com, 29 Jan 2013; Athlete, 22 Oct 2015)
Other information
FROM RUGBY TO ATHLETICS
He was preparing for a career as a professional rugby union player in South Africa with the Golden Lions before his accident in October 2003. "On the way to the hospital, these rugby thoughts were all making their way out of my life. It was like a whole bucket of cold water had been poured over me." After the death of a friend, he realised his accident could have been more serious and he still had a lot to live for, so he began to participate in para-sports. (ossur.com, 04 Nov 2010)

OTHER ACTIVITIES
Since 2011 he has been an ambassador for Jumping Kids, a non-profit organisation that provides prosthetics for South African children living with lower extremity amputations from disadvantaged backgrounds. (jumpingkids.org.za, 10 Sep 2014; 30 Mar 2016)

OTHER STUDIES
In 2008 he completed an honours degree in accounting at the University of South Africa in Pretoria, South Africa. (coffeewithbee.co.za, 04 Apr 2016)