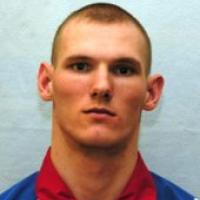 When and where did you begin this sport?
He began the sport at age 12 in Yekaterinburg, Russian Federation.
Why this sport?
His teachers were worried that he sat alone in class and encouraged him to take up a sport in order to better socialise.
Club / Team
Rodnik Centre of Paralympic and Deaflympic Preparation: Yekaterinburg, RUS
Name of coach
Boris Dvornikov [personal], RUS, from 1996

Hobbies
Collecting badges, listening to music, reading. (Athlete, 27 Apr 2020)
Memorable sporting achievement
His performance at the 2004 Paralympic Games in Athens. (Athlete, 27 Apr 2020)
Most influential person in career
Coach Boris Dvornikov. (Athlete, 08 Feb 2011)
Awards and honours
He carried the Paralympic torch in Yekaterinburg as the relay made its way through the Russian Federation ahead of the 2014 Paralympic Winter Games in Sochi. (ekburg.ru, 21 Feb 2014)

He was Russia's flag bearer at the closing ceremony of the 2008 Paralympic Games in Beijing. (nashural.ru, 20 Mar 2014)

He was named as one of Russia's 10 Best Sportsmen of 2004 by the country's Federation of Sports Journalists. (kommersant.ru, 21 Dec 2004)

He holds the title of Honoured Master of Sport in the Russian Federation. (minsport.gov.ru, 30 Dec 2019)
Famous relatives
His wife Yulia Arefieva competed in Para athletics and received the title of Master of Sport of International Class in the Russian Federation. After retirement, she has worked as a coach in Para athletics. (Athlete, 27 Apr 2020; rezeptsport.ru, 21 Feb 2016)