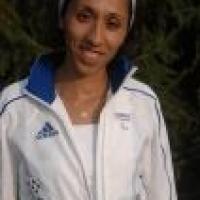 When and where did you begin this sport?
She began training at age 16.
Club / Team
US Creteil: France
Name of coach
Patrice Gerges, FRA; Olivier Deniaud [national], FRA

Awards and honours
She was France's flag bearer at the opening ceremony of the 2008 Paralympic Games in Beijing. (rtl.fr, 16 Nov 2010)
Impairment
At age 16 she was diagnosed with retinitis pigmentosa, which resulted in her losing most of her sight. (rmc.fr, 16 Nov 2010)
Other information
PRESIDENTIAL SNUB
In 2008, she voiced her disappointed when French president Nicolas Sarkozy broke his promise to meet the country's Paralympians. Speaking on an evening news programme, she accused Sarkozy of ignoring the Paralympic Games and claimed para-athletes do not receive the same support as able-bodied athletes. (marianne2.fr, lepost.fr,19 Sep 2008)