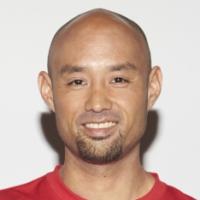 When and where did you begin this sport?
He took up the sport in 2000 in Nagoya, Japan.
Why this sport?
He became interested in the sport after meeting a prosthetic technician. He also wanted to do a sport that he could start by himself.
Club / Team
Shinnihonjusetsu: Japan

He had surgery on his right shoulder after he dislocated it three times while in university. (bladeathlete.com, 01 Jul 2018)
Awards and honours
In 2016 he received the Kakegawa Citizen Honorary Award in Japan. (at-s.com, 08 Nov 2016)

He received the Osaka Sports Grand Prize in 2008. (ouhs.jp, 17 Dec 2008)
Other sports
He has competed in Para snowboarding at international level, including at the 2018 Paralympic Winter Games in Pyeongchang. (SportsDeskOnline, 31 Dec 2020)
Ambitions
To win a gold medal in athletics at the 2020 Paralympic Games in Tokyo. (projectdesign.jp, 15 Apr 2020)
Impairment
His left leg was amputated below the knee following a motorcycle accident in 2000. (Athlete, 10 Mar 2018; s-rights.co.jp, 16 Mar 2015)
Other information
OCCUPATION
He has worked as a visiting associate professor at Osaka University of Health and Sport Sciences in Kumatori, Japan. (projectdesign.jp, 15 Apr 2020; bladeathlete.com, 23 Aug 2019)

FURTHER EDUCATION
He has completed a master's degree in sports mechanics at the Osaka University of Health and Sport Sciences. He also has a licence as a prosthetist in Japan. "I have obtained knowledge of prostheses, and I now experiment with my own to optimise my performance." (parasapo.tokyo, 23 Nov 2017; esquire.com, 25 Oct 2019)

OTHER ACTIVITIES
In 2020 he was appointed as an ambassador for the Para athletics 2022 World Championships in Kobe, Japan. (Instagram profile, 17 Feb 2020)

SNOWBOARDING
He has competed in Para snowboarding at the Paralympic Winter Games. He began snowboarding at age 20 in Nagano Prefecture, Japan, and took up the sport seriously in 2017. Snowboarding was his favourite sport before his accident, so it was the first Para sport that he tried after his left leg was amputated. "I have always engaged in other sports during the Para athletics off-season or when I have spare time between competitions. Among them, snowboard is something that I am seriously committed to." (parasapo.tokyo, 23 Nov 2017; Athlete, 10 Mar 2018; parasapo.tokyo, 23 Nov 2017)