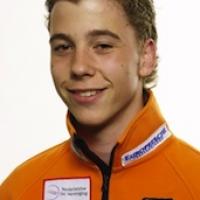 When and where did you begin this sport?
He first tried skiing at age three while on holiday in Austria.
Why this sport?
His family introduced him to the sport.
Name of coach
Falco Teitsma [national], NED

Hobbies
Cycling. (nskiv.org, 14 Feb 2012)
Memorable sporting achievement
Competing at the 2014 Paralympic Winter Games in Sochi. (nskiv.org, 27 Jan 2015)
Most influential person in career
His parents. (Athlete, 20 Nov 2013)
Ambitions
To win a medal at the 2018 Paralympic Winter Games in Pyeongchang. (nskiv.org, 15 Oct 2014)
Impairment
He was born prematurely, and after tests revealed he had had two strokes he was diagnosed with cerebral palsy. (skibart.nl, 14 Feb 2012)
Other information
OCCUPATION
He works as a fitness coach at the David Lloyd Health and Fitness Club in Utrecht, Netherlands. (nskiv.org, 27 Jan 2015)