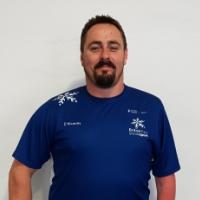 When and where did you begin this sport?
He first tried the sport on his 21st birthday with his friends while on holiday in Bansko, Bulgaria. He liked extreme sports and had always wanted to try snowboarding.
Why this sport?
He enjoyed the sport and became a snowboard instructor when a chance encounter led him into competitive snowboarding. "I got picked up hitch-hiking by the coordinator of an event I was at and head coach of the Canada Para snowsports team at the time, she told me about an event that was being hosted at the time on the mountain where I was working. I had no idea it was occurring, but she invited me to take part once she realised my disability, but they had to make sure I was of a respectable enough level. Fortunately it snowed that day, so I went and threw myself off every lump and bump that was going, went head over heels but was told I was what they were looking for."
Name of coach
Simon Nicholson [national] GBR

In January 2016 he broke his left ankle while competing at the Winter X Games in Aspen, CO, United States of America. After recovering from the injury, he underwent surgery in May 2016 on his right ankle due to osteoarthritis, a condition caused by damaged joint cartilage. (Facebook page, 04 May 2016; 09 May 2016)
Milestones
He became the first British Para snowboarder to win a medal at the world championships when he claimed bronze in snowboard cross at the 2015 edition in La Molina, Spain. (bbc.co.uk, 24 Feb 2015; paralympics.org.uk, 16 Mar 2018)
Ambitions
To compete at the 2022 Paralympic Winter Games in Beijing. (paralympics.org.uk, 16 Mar 2018)
Impairment
He was involved in a motorcycle accident in 2005, which resulted in the paralysis of his left arm. "I spent six months recuperating and coming to terms with it, then I got on a skateboard. I spent my time out after my accident, then I decided to get on my friend's motorcycle and I started riding again. I still ride to this day." (plymouthherald.co.uk, 06 Nov 2014; Athlete, 05 Mar 2018; plymouthherald.co.uk, 12 Mar 2018)
Other information