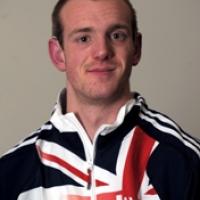 When and where did you begin this sport?
He took up athletics in 2005.
Why this sport?
"I first got in to athletics through my physical education teacher at Treloars School, who took about 25 of us to the athletics championships in Blackpool every year. When I got to my final year, I decided to do a bit of training and ended up winning the 100m. After the race the school were approached by a talent scout who had attended the event and seen me win my race. It was only by luck I got spotted on that day as the scout had missed his train and stayed around to watch."
Club / Team
Team Bath: England
Name of coach
Rob Ellchuk [club], CAN, from 2005; Paula Dunn [national], GBR

Nicknames
Ginger Monkey, Ben (teambath.com, 12 May 2014; telegraph.co.uk, 26 Aug 2011)
Hobbies
Watching documentaries. (sportsrush.org.uk, 15 Jun 2015)
Memorable sporting achievement
Winning silver in the T36 100m at the 2008 Paralympic Games in Beijing, despite running with a broken foot. (sportsrush.org.uk, 15 Jun 2015)
Most influential person in career
Coach Rob Ellchuck. (Athlete, 07 Dec 2010)
Hero / Idol
German physicist Albert Einstein, British author Christopher Hitchens, US entrepreneur Steve Jobs. (sportsrush.org.uk, 15 Jun 2015)
Injuries
He was hampered by a foot injury during the 2008 Paralympic Games in Beijing, which caused him to pull out of the T36 200m. Scans later revealed that the foot was broken in two places. He has also had lower back problems. (Athlete, 07 Dec 2010; uka.org.uk, 20 May 2009)
Sporting philosophy / motto
"Be the best you can be." (Athlete, 07 Dec 2010)
Awards and honours
In May 2014 he was inducted into the Hall of Fame for Sport at the University of Bath in England. (teambath.com, 12 May 2014)

He was named the University of Bath's Sports Personality of the Year in 2009. (teambath.com, 12 May 2014)
Impairment
He has cerebral palsy and a hearing impairment. When he was born, his parents were told he might not survive the night and doctors thought he would never walk. (guardian.co.uk, 22 Jun 2012)
Other information
WORLD FIRST
In 2007 he became the first man to break the 25-second barrier in the 200m [T36 classification]. He set the record at a World Cup event in Manchester, England. (paralympics.org.uk, 2007)

FILM STAR
In 2011 a documentary called 'BEN' premiered in his hometown of Bath, England. The film follows his life and his performances between the 2008 Paralympic Games in Beijing and the 2011 World Championships in Christchurch, New Zealand. (bath.ac.uk, 11 Oct 2011)