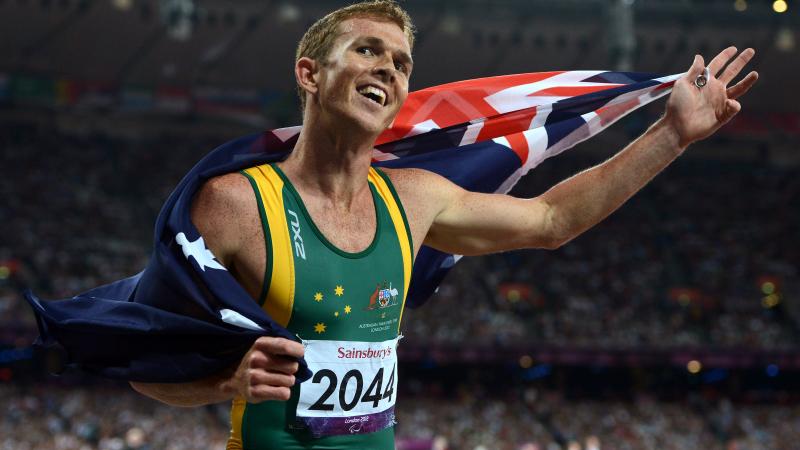 When and where did you begin this sport?
He took up competitive running in 2006 in Perth, WA, Australia.
Why this sport?
He was noticed by coaches at an Australian Paralympic Committee [APC] talent search day.

Memorable sporting achievement
Winning silver in the 800m in front of 90,000 people at the 2008 Paralympic Games in Beijing. (Athlete, 23 Oct 2015)
Hero / Idol
Australian runner Craig Mottram, Australian cricketer Adam Gilchrist, Australian Paralympic sprinter Heath Francis. (paralympic.org.au, 11 Jan 2010; Athlete, 23 Oct 2015)
Sporting philosophy / motto
"If you don't take control over your disability, your disability will control you." (Athlete, 23 Oct 2015)
Awards and honours
He was named the 2012 Southwest Sports Star Of The Year by the Australian newspaper South Western Times. (Linkedin profile, 06 Jan 2015)
Other sports
He played Australia rules football at junior level for the Eaton Boomers in the South West Football League in Australia. (perthnow.com.au, 23 Mar 2016)
Famous relatives
His mother played netball at state level. (paralympic.org.au, 11 Jan 2010)
Impairment
He was born with cerebral palsy. (Athlete, 23 Oct 2015)
Other information
RETIREMENT
In November 2016 he retired from competitive para-athletics so that he could focus on his studies. "I still enjoy running, but know that I have value to give in other areas." (paralympic.org, 25 Nov 2016)