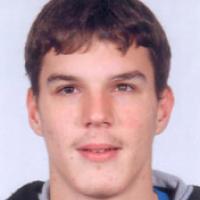 When and where did you begin this sport?
He began the sport in 2005 at the AK Zagreb club in Croatia.
Why this sport?
As a child he played handball, but he had to stop the sport due to his impairment. His mother got him involved in athletics and he chose to specialise in javelin because he found it similar to handball.
Club / Team
AK Agram: Zagreb, CRO
Name of coach
Ante Pavkovic [club], CRO; Damjan Sedic [national], CRO

Most influential person in career
His parents. (zssi.hr, 2016)
Injuries
In May 2015 he injured the adductor muscle in his right leg while competing at the International Blind Sports Federation [IBSA] World Games in Seoul, Republic of Korea. (in-portal.hr, 13 May 2015)
Sporting philosophy / motto
"The best work in life is what you love to do and where you have set goals for yourself." (paralympic.org, 22 Nov 2013)
Awards and honours
He was Croatia's flag bearer at the opening ceremony of the 2016 Paralympic Games in Rio de Janeiro. (myinfo.rio2016.com, 06 Sep 2016)

He was named the 2008 Best Athlete with an Impairment by the Zagreb Sports Association in Croatia. (zssi.hr, 31 Aug 2012)

He received a State Award for Sport from the Croatian Paralympic Committee in 2008. In the same year he was also named an honorary citizen of the town of Kutina in Croatia. (zssi.hr, 31 Aug 2012)
Other sports
He is a former handball player. (tportal.hr, 06 Sep 2012)