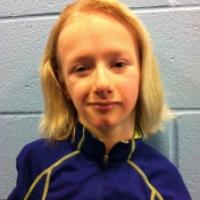 When and where did you begin this sport?
She began swimming in 2012 at age 10.
Why this sport?
Swimming was originally recommended to her by her physical therapist as a way to strengthen her body but she later decided to compete in the sport.
Club / Team
Ridgewood YMCA Dolphins Swim Team : Cleveland, OH, USA
Name of coach
Kim Audibert [club]
Training Regime
She trains up to four times a week.