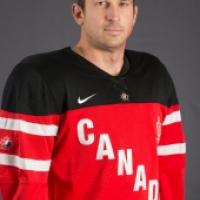 When and where did you begin this sport?
He began playing Para ice hockey in 2012 in Barrie, ON, Canada.
Why this sport?
He had heard about Para ice hockey before his accident, so when he was fit enough after his rehabilitation he decided to try the sport.
Name of coach
Ken Babey [national], CAN
Preferred position / style / stance / technique
Forward

Most influential person in career
His family. (carranza.on.ca, 20 Sep 2015)
Sporting philosophy / motto
"Without self-discipline, success is impossible." (Twitter profile, 11 Jan 2018)
Ambitions
To compete at the 2018 Paralympic Winter Games in Pyeongchang. (carranza.on.ca, 01 Dec 2015)
Impairment
He was involved in a motorcycle accident in 2009, which resulted in the amputation of his left leg below the knee. He also sustained third degree burns to over 50% of his body. (carranza.on.ca, 20 Sep 2015)
Other information
TATTOOS
He has tattoos of flames, a guardian angel and a phoenix covering the skin grafts on both arms, representing his recovery from his motorcycle accident in 2009. "The one on my right side is all basically from the accident, so it started with the flames here and then it goes up into roses, guardian angel, which I believe I did have through this whole process." (hockeycanada.ca, 08 Dec 2017)

LEADER
He was named alternate captain of the Canadian national Para ice hockey team for the 2016/17 season. (hockeycanada.ca, 03 Oct 2016)