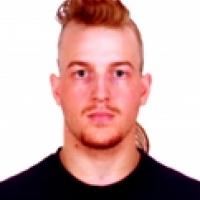 Nicknames
Brusio [as a child he always had some kind of injury]. (alpinecanada.org, 10 Jun 2012)
Hobbies
Whitewater kayaking. (Facebook page, 24 Feb 2015)
Most influential person in career
His parents. (teambc.org, 28 Feb 2011)
Hero / Idol
Canadian Paralympic skier Phil Chew, US motocross and extreme sports stunt performer Travis Pastrana. (paralympic.ca, 21 Jan 2014; alpinecanada.org, 10 Jun 2012)
Famous relatives
His wife Andrea Dziewior represented Canada in para-alpine skiing at the 2010 Paralympic Winter Games in Vancouver. She finished ninth in the downhill standing event. (SportsDeskOnline, 17 Mar 2015; cftktv.com, 08 Jul 2014)
Impairment
In 2007 while snowboarding, he attempted a 12-metre jump and landed badly. His injuries resulted in paraplegia. (Facebook page, 24 Feb 2015; canada.com, 22 May 2007)
Other information
RETIREMENT
He announced he was retiring from competitive sport in July 2014. "When you're on the road all the time and you're pushing your limits as far as you can, you start to get a little bit worn out." (cftktv.com, 08 Jul 2014)

OTHER ACTIVITIES
He has worked as a whitewater kayak instructor during the northern hemisphere summers. (paralympic.ca, 21 Jan 2014)