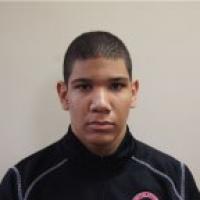 When and where did you begin this sport?
He began wheelchair racing at age eight.
Why this sport?
"It was just so awesome that I wanted to try it. I felt like it was part of me and I knew that’s what I wanted to do for the rest of my life.”

Hobbies
Ice sledge hockey, archery. (Facebook page, 21 Apr 2017)
Awards and honours
He was named track MVP at the 2016 Adaptive Sports Ohio Awards. (adaptivesportsohio.org, 27 May 2016)
Ambitions
To compete at the Paralympic Games. (holmescountyticket.com, 09 Jun 2015)
Impairment
He was born with spina bifida. (yahoo.com, 2014; unitedspinal.org, 09 Jan 2012)
Other information
ROLE MODEL
He aspires to be a role model for other athletes with an impairment, and someone that other people look up to. "So many people with an impairment aren't active enough, and because of that, they aren't healthy. If I can be a part of inspiring others to get involved with sports at an early age, then they can live a better quality of life. That is one of the most important things I can do." (holmescountyticket.com, 09 Jun 2015)

STATE FIRST
In 2010 he became the first student wheelchair racer in Ohio, United States of America, to join a school athletics team. "I heard about some of the other people who joined their track teams in other states. I wanted to try to do that." (yahoo.com, 2014; highschoolot.com; 2013; adaptivesportsohio.org, 12 Jun 2012)

VOLUNTEER
He works as a volunteer at Adaptive Sports Program of Ohio, a non-profit organisation that promotes the health and wellness of people with impairments. The organisation was founded by his mother, Lisa Holloway. (Facebook profile, 07 Apr 2017; woosterweeklynews.com, 26 Sep 2016)

LOCAL HONOUR
He has an asphalt nature trail named in his honour in his hometown of Wooster, OH, United States of America. The path, named 'Casey's Trail' was unveiled in early October 2016. “It's really an honour to be part of this community and have a landmark named after me." (woosterweeklynews.com, 26 Sep 2016)