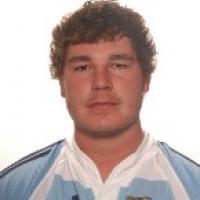 When and where did you begin this sport?
He took up athletics at school.
Why this sport?
He has always been active and loves sport.
Name of coach
Suzanne Ferreira, RSA

Memorable sporting achievement
Winning bronze at the 2011 World Championships in Christchurch, New Zealand. (sascoc.co.za, 06 Sep 2012)
Hero / Idol
His father. (Athlete, 26 Jan 2011)
Sporting philosophy / motto
"There's always someone worse off than you." (sascoc.co.za, 06 Sep 2012)
Awards and honours
He received the Potchefstroon Mayor's Award in 2009. (Athlete, 26 Jan 2011)
Impairment
His right leg was amputated after he was involved in a motorcycle accident in February 2008. (isabilitysports.co.za, 14 Jun 2011)