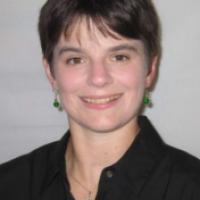 When and where did you begin this sport?
She took up wheelchair sport while a student at Oklahoma State University in the United States of America. A coach spotted how skilfully she moved across campus in her chair, and asked her to consider wheelchair sports.
Why this sport?
She initially played wheelchair basketball, but after a recurrence of Devic's disease in 2006 she no longer had the upper body strength for the sport. She switched to wheelchair rugby, and then took up Para cycling and Para athletics.

Injuries
She was unable to compete in early 2015 because of health issues. (paralympic.org, 20 Jun 2015)
Sporting philosophy / motto
"Believe in yourself, take risks, and never give up." (ninds.nih.gov, 13 Aug 2019)
Other sports
Before her illness she was a world champion in western horse speed events in the United States of America. She has been selected as an alternate for the United States of America wheelchair basketball team, played wheelchair rugby for Shepherd Smash in Atlanta, GA, United States of America, and also competed in Para cycling at international level. (cassie-mitchell.com, 19 Apr 2012)
Ambitions
To win a gold medal at the 2020 Paralympic Games in Tokyo. (Machine Learning Center at Georgia Tech YouTube channel, 13 Sep 2019)
Impairment
She has quadriplegia and a vision impairment after developing neuromyelitis optica [Devic's disease] following an allergic reaction at her high school graduation at age 18. She is completely paralysed from the chest down, has an impairment to her arms, wrists and hands, and has permanent double vision. (nique.net, 14 Oct 2016; cassie-mitchell.com, 23 Jun 2015)
Other information
LEUKAEMIA
In 2016 she was diagnosed with chronic myeloid leukaemia, a form of bone marrow cancer. She still went on to qualify for the 2016 Paralympic Games in Rio de Janeiro, where she won two medals. "I am hoping that it will be an inspiration to other people whatever your obstacles are that if you have faith, you can persevere and overcome." (SportsDeskOnline, 23 Oct 2019; dailymail.co.uk, 14 Sep 2016; news.emory.edu, 07 Sep 2016)

LONDON RESILIENCE
She made the US Para athletics team for the 2012 Paralympic Games in London after she was not selected for the Para cycling team. "In 2011 I was the [Para cycling] world champion in my division, the first quadriplegic female to be a world champion. I thought everything was on track to do cycling in London, but when it came to actually select the team I was not named. I don't really know why. So, five days later, I went and qualified for the track team. I went to London in what I considered to be my B sport." (newsok.com, 13 Jul 2013)

OCCUPATION
She works as an assistant professor at Georgia Institute of Technology in Atlanta, GA, United States of America. (bme.gatech.edu, 13 Sep 2019)

FURTHER EDUCATION
She studied medicine at graduate school at Georgia Institute of Technology and Emory University's joint facility in Atlanta, United States of America. She has also completed a doctorate in neuroengineering. (cassie-mitchell.com, 23 Jun 2015)