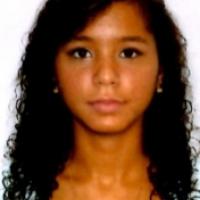 When and where did you begin this sport?
She took up the sport at age three in Natal, Brazil.
Why this sport?
She began swimming following advice from doctors. "It is something I love and it satisfies my soul."
Club / Team
Associacao Paralimpica de Indaiatuba [ADI APIN]: Brazil
Name of coach
Antonio Luiz Duarte Candido [club, national], BRA

In 2018 and 2017 she was named Para Swimmer of the Year by Brazilian swimming website Best Swim. (bestswim.com.br, 19 Dec 2018, 31 Dec 2017)
Ambitions
To win a medal at the Paralympic Games. (paralympic.org, 10 Dec 2016)
Impairment
She has cerebral palsy following complications at birth, which limits the movement of the left side of her body. (cpb.org.br, 01 Sep 2019; natacaopotiguar.blogspot.com, 10 Jan 2018; globo.com, 18 Nov 2014)
Other information
RIO ILLNESS
She contracted mumps during the 2016 Paralympic Games in Rio de Janeiro and, after participating in three events, had to stop competing at the Games. "I thought it was a toothache and the doctor did not want to tell me what it was at first. Later they told me that I could not compete, because it was contagious." She did not train or compete in the pool for the next seven months. (esportes.estadao.com.br, 23 Apr 2017)