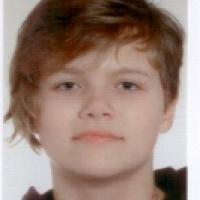 When and where did you begin this sport?
She began Para athletics in 2014 in Cottbus, Germany.
Why this sport?
"I heard of the possibility to do sports with an impairment. I wanted to do this and show other people that it is possible."

In 2018 she was included in the Ehrenchronik [Honorary Chronicle] of the city of Cottbus, Germany. (cottbus.de, 21 Feb 2018)

In 2017 she was chosen Talent Athlete of the Year in Cottbus, Germany. (lr-online.de, 26 Jan 2018)
Other sports
She has competed in Para swimming at junior national level in Germany. (schwimmen-brandenburg.de, 2015)
Ambitions
To compete at the 2020 Paralympic Games in Tokyo. (deutsche-paralympische-mannschaft.de, 2017)
Impairment
She has impaired muscle power in her legs because of spastic diplegia. (Athlete, 08 Nov 2019; lr-online.de, 27 Sep 2014)